What was in Chancellor Rishi Sunak’s Autumn 2021 Budget statement for people and business? We take an Astute look at the key takeaways! 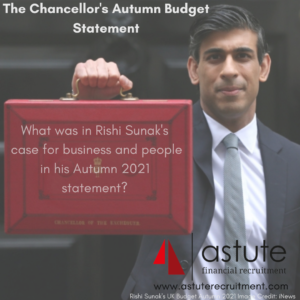 What was in Chancellor Rishi Sunak’s Autumn 2021 Budget statement for people and business? We take an Astute look at the key takeaways!

In the biggest single-year rates cut in over 30 years, Rishi Sunak has announced a raft of changes.

Included in measures revealed by Chancellor Rishi Sunak today was the announcement that the National Minimum Wage is to rise for the second time this year to £9.50 – an increase of 6.6%.

As reported in a piece by Accountancy Today, Sunak unveiled a 50% discount on business rates for the hospitality, retail and leisure sectors (up to £110,000), equating to a business tax cut worth £1.7bn, the biggest single-year rates cut for firms in over 30 years.

Unveiling his latest Budget in the Commons today (27 October), Sunak said it will help deliver a “stronger economy for the British people”. Nonetheless, he warned of “challenging months ahead”.

Sunak noted that while business rates will be retained, the government will introduce “key reforms”, with more frequent revaluations of rates set to be made every three years from 2023 onwards.

Following suggestions from the British Retail Consortium (BRC) and the British Property federation, Sunak also revealed that from 2023, every company will also be able to make property improvements without having to pay additional business rates for 12 months.

Amongst other measures unveiled by the chancellor, he confirmed that the national minimum wage is set to rise for the second time this year by 6.6% to £9.50 from £8.90 and will come into effect from 1 April.

For the food and drink sector, the chancellor also announced a five-step plan to overhaul alcohol duty, which he called “outdated, complex and full of historical anomalies”. As such, the government is slashing main duty rates from 15 to six – with the new duty aimed at working on the basis of the higher the alcohol level, the higher the rate of tax.

This was also accompanied by a lower rate of duty on draught beer and cider by 5% and a he also confirmed the planned increase of duty on spirits such as Scotch whiskey will be cancelled.

Meanwhile, the Universal Credit taper rate is set to be slashed by 8% from 63% to 55%, which is set to be introduced “no later” than 1 December.

It comes after Sunak noted that inflation has risen to 3.1% in September as demands for goods “increased more quickly” than the supply chain was able to handle, adding that this is set to continue with the Office for Budget Responsibility (OBR) expects inflation to average 4% over the next year.

“This government chooses to invest and build a stronger economy for the future. We’re unleashing the dynamism and creativity of British businesses with a simpler, fairer, more competitive tax system.

“By the end of this parliament I want taxes to go down, not up.”