We hope you didn’t have any dragons to slay on St George’s Day! Read our 9 little-known facts about England’s patron saint 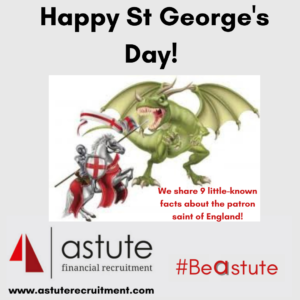 However, like many early saints, the exact details of his life remain a mystery. Here, we separate the facts from the fiction, establishing the truth behind the legend of St George. Here are 9 little-known facts about our own favourite patron saint!

St George might be hailed as a national hero, but he was actually born – in the 3rd century AD – more than 2,000 miles away from England in Cappadocia (modern-day Turkey).

He is thought to have died in Lydda (modern-day Israel) in the Roman province of Palestine in AD 303. It is believed that his tomb was in a place called ‘Lod’, a centre of Christian pilgrimage.

Often portrayed as a knight in shining armour, the truth is less fanciful.

Whilst St George was depicted from the 11th century as a heroic knight or a warrior on horseback, it is more likely that he was a humble officer in the Roman army.

3. ST GEORGE WAS A MARTYR

Like many saints, St George was described as a martyr after he died for his Christian faith. It is believed that during the persecutions of Emperor Diocletian in the early 4th century, St George was punished by execution, for refusing to make a sacrifice in honour of the pagan gods at that time.

Yep, St George never actually visited England. However his reputation for virtue and holiness spread across Europe and his feast day – the 23rd April – was celebrated in England from the 9th century onwards.

He became popular with English kings. Edward I (1272-1307) had banners bearing the emblem of St George (a red cross on a white background) and Edward III (1327-77) had a strong interest in the saint and owned a ‘phial’ or ‘relic’ of his blood. It was not until the reign of Henry VIII, that the cross of St George was used to represent England.

5. THE DRAGON WAS ADDED LATER

The story goes that St George rode into Silene (Libya) to free the city from a dragon who had a taste for humans, but it’s a story that post-dates the real George by several centuries!

Images of George and the dragon survive from the 9th century – 500 years after his death. Originally these may simply have been symbolising the battle between Good and Evil. In the Middle Ages, the story was developed and popularised in a compendium of stories about saints’ lives called ‘The Golden Legend’.

St George was canonised in AD 494 by Pope Gelasius, who claimed he was one of those ‘whose names are justly revered among men but whose acts are known only to God’.

A feast day of St George has been celebrated in England for hundreds of years on 23 April, which was possibly the date of his martyrdom. Following the Battle of Agincourt in 1415, St George’s Day became one of the most important feast days in the English calendar.

7. ENGLAND ISN’T THE ONLY COUNTRY TO CELEBRATE ST GEORGE

St George is truly an international saint and England is not the only country or region to claim him as its patron. Something that in todays multi-cultural England, ought to be celebrated!

England shares St George with Venice, Genoa, Portugal, Ethiopia and Catalonia among others as their patron saint and many of these places have their own celebrations and ceremonies in his honour.

During the Middle Ages, people believed that St George was one of the ‘Fourteen Holy Helpers’ – a group of saints who could help during epidemic diseases. St George’s protection was invoked against several nasty diseases, many fatal and with infectious causes, including the Plague and leprosy. It is a shame we cannot invoke his name to defeat the Coronavirus!

From around 1100, St George’s help was also sought to protect the English army. In William Shakespeare’s Henry V, the monarch calls on the saint during his battle cry at the Battle of Harfleur in the famous, “Once more unto the breach, dear friends” speech, crying “God for Harry! England, and St. George!”

Five hundred years later – during the First World War – a ghostly apparition of St George is said to have aided British troops during their retreat from Mons, and the naval commander of the Zeebrugge Raid, cited the saint as inspiration!

9. ST GEORGE REPRESENTS THOSE WE HONOUR

The Order of the Garter (founded by Edward III in 1348) is the very highest order of chivalry in the country, with Queen Elizabeth II at the helm as ‘Sovereign of the Garter’.

To this day, St George’s cross still appears on the Garter badge and his image is the pendant of the Garter chain.

In 1940 King George VI created a new award for acts of the greatest heroism, bravery or courage in the face of extreme danger. The George Cross, named after the king, bears the image of St George vanquishing the dragon. The image of St George also adorns many of the memorials built to honour those killed during World War One.

Last year, poignantly, thoughts on this day turned to the bravery, dedication and hard work of all critical workers and our NHS Heroes who worked so valiantly to help those affected by the Coronavirus and COVID-19. This year, with the huge success of the vaccine roll-outs and reduced infections – we are thankfully in a totally different place.