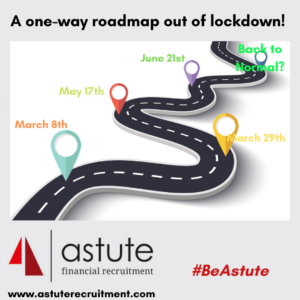 A one-way roadmap out of ‘lockdown’ has been outlined this afternoon, giving much-needed hope across Boardrooms and businesses across the UK.

A one-way strategy of positive milestones from the Government was announced by the Prime Minister, Boris Johnson this afternoon. The basic points are set out below. It is important to remember that these will be conditional on the continued success of the vaccine rollout and maintaining declining figures of hospitalisations and infections.

Let’s hope that the 3rd March Budget will also provide some fiscal good news and continued support for businesses, employers, and staff.

Of course, we need to be guided by the science, and there are lots of unknowns, but this is such a positive step for everyone.

More detail will follow in the coming days, but let’s hope that this is a real one-way road and marks the safe and effective route to get business back to normal.