Friday 8th May 2020 – VE Day. We take a look at the historic events that led to the Allies achieving ‘Victory in Europe’. 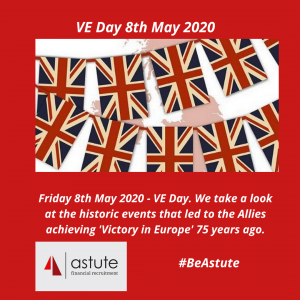 We should take hope and heart that the most vicious of foes those years ago could be and was defeated and our current foe, COVID-19, will, in time, also be defeated.

For now, we need to remind ourselves of the sacrifices and heartache that our ancestors undertook to secure a peace that has lasted ever since in Western Europe. Take heart from the fact that we all have it in ourselves to be inspirational & courageous. Together, we can overcome any obstacle whether human or biological if we work together and stand united. And as the country unites in some much-needed celebrations, we wanted to put together a brief history of the key events that triggered and finally resolved what was the Second World War.

How we got to VE Day

In the 1930s, Adolf Hitler’s Nazi party took control in Germany with ambitious plans to expand beyond Germany. Early in 1939, Germany gained control of Austria, the Czech Republic, & Italy as an ally. The UK, France & others were concerned, but most countries were still wary of war after the horrors and impacts of the First World War. Following an invasion of Poland, and war was finally declared by the Allies in September 1939.

The war took many huge twists and turns, with the victorious side looking to be either Hitler or the Allies in equal turn. Germany was extremely successful using a method of quick, superior attacks – the ‘Blitzkrieg’ (lightning war in German). Eventually, the tide turned in favour of the Allies with German troops pushed back & conquered territories being liberated. By February 1945, the Allies had entered Germany and by late April 1945, Berlin was captured.

By the 7th May, both Italy & Germany had lost the very leaders who had taken them into war, & both had signed a total, unconditional surrender, effective from the 8th May.

Over 1 million people celebrated in the streets throughout Britain to mark the end of the European part of the war. In London, crowds thronged, cheered and gathered from Trafalgar Square along The Mall and all the way to Buckingham Palace, where King George VI & Queen Elizabeth, with Prime Minister Winston Churchill, appeared on the balcony of the palace before the cheering crowds.

The young Princesses Elizabeth (now our Queen) and her sister, Margaret, were given discreet permission to go incognito and celebrate with the public.

The End of the war.

VE Day only acknowledged the end of fighting in Europe, not the end of World War 2. Japan was still fighting against the Allies in May 1945. It wasn’t until August 1945 that Japan would surrender, with the official end of the 2nd World war signed and ratified in September 1945.