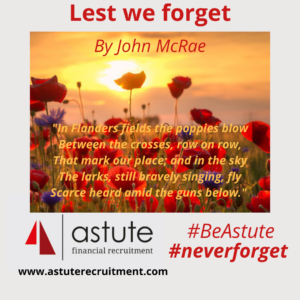 On the 11th hour of the 11th day of the 11th month each year we have a minute’s silence to remember and reflect on all of those who gave up their tomorrows for all of us.

Fathers, sons, uncles and brothers, lost and maimed in wars since the First World War.

So whatever you are doing at 11am on the 11th November, stop for a moment and have a silent thought for all of those who have given so, so much.

Remembrance Day is marked every year on 11 November, the anniversary of the signing of the Armistice marking the end of the First World War in 1918. In 2021, this falls on a Thursday.

Traditionally, a 2 minute silence is held at 11am, to recognise the exact time that the hostilities ceased in 1918 – ‘the 11th hour of the 11th day of the 11th month’.

Many radio and media stations fall silent, including BBC One at 11am on Armistice Day, while schools, workplaces and employers will also call on pupils and employees to observe the silence.

Armistice Day is marked by all nations of the Commonwealth, while many other countries mark the anniversary as a day of memorial.

There are also large-scale commemorations on Remembrance Sunday, which always falls on the second weekend of November, with this year’s memorial falling on Sunday 14th November.

Today Colin McCrae’s poem, In Flanders Fields, still evokes powerful emotions just as it did when he wrote it.

We’ve popped his poem below, and hope his words remind us all of the huge sacrifice made by so many brave souls.

In Flanders Fields, by John McCrae

In Flanders fields the poppies blow
Between the crosses, row on row,
That mark our place; and in the sky
The larks, still bravely singing, fly
Scarce heard amid the guns below.
We are the Dead. Short days ago
We lived, felt dawn, saw sunset glow,
Loved and were loved, and now we lie,
In Flanders fields.
Take up our quarrel with the foe:
To you from failing hands we throw
The torch; be yours to hold it high.
If ye break faith with us who die
We shall not sleep, though poppies grow
In Flanders fields. 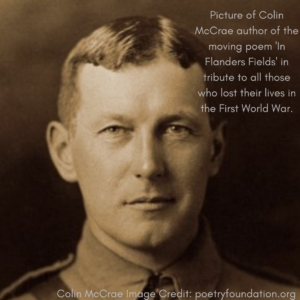